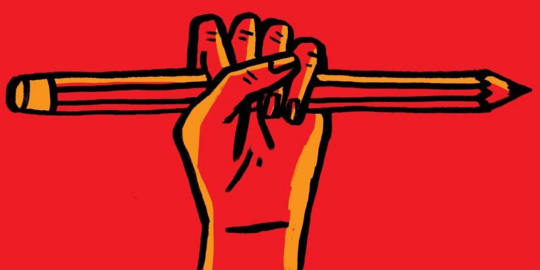 This session is a hands-on workshop in radical educational technique. It has four parts:

Why radical education?  The term is intended to distinguish an approach to learning that differs fundamentally from traditional education, or from what most of us unsuspectingly assume to be education, pure and simple. In other words, radical education uproots the values intrinsic to what is typically named “education,” such as the the presence of a master explicator, hierarchies of intelligence (inferior-superior), and the very necessity of discrete disciplines.

In brief, “radical education,” as I wish to employ it, refers to an orientation directed toward “the overcoming of self-imposed immaturity,” as Immanuel Kant summed up the European Enlightenment project. Additionally, as a practitioner of radical education will quickly add, that goal necessarily involves “the overcoming of socially-imposed immaturity,” or of acquiescent conformity to the status quo around authority, gender dynamics, and institutional control of knowledge formation. Radical education pedagogy thus fosters an acute awareness of the many interconnected “forces” operating on our lives and world, from the personal and psychological, to the interpersonal and social, to the political and ideological.

The goal of fostering such critical awareness, it should be emphasized, is not the creation of the contented, resilient individual that is envisioned by corporate-consumerist capitalism. Rather, the goal is the development of courageous communities of people devoted to the democratic principles of equality, justice, inclusion, environmental care, compassion for all sentient beings. As this suggests, learning within a radical educational context is as deeply rooted in our social and political realities as in our personal and private ones.

How might a new practice of education help to cultivate such communities of people?