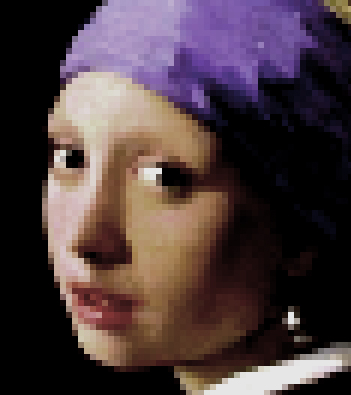 Yesterday I received the latest issue of Adbusters.

On page thirteen we find a citation of Sogyal Rinpoche. It is superimposed on a two-page reproduction of Vermeer’s Girl with a Pearl Earring. The citation begins:

Because in our culture we overvalue the intellect, we imagine that to become enlightened demands extraordinary intelligence.

And it ends with an alleged Tibetan proverb:

Theories are like patches on a coat, one day they just wear off.

I was shocked to read a citation of Sogyal Rinpoche in Adbusters. If there is one big liar in Tibetan Buddhism, it is this man. I wrote a comment at the Adbusters site at once, formulating my objection, but it didn’t go through and wasn’t published. Strange.

The citation is a case of the typical anti intellectual stance x-buddhists take as their savoir vivre.

The logical mind seems interesting, but it is the seed of delusion.

Such a “logic” (also from the citation) is enough for the x-buddhist to disparage thinking once and for all. But this is not the point here. The point is that Adbusters, a magazine that is the self-declared front of the revolutionary meme-war against the dead dog of capitalism is falling prey here to their very enemy. For Sogyal Rinpoche offers nothing whatsoever that can lead us out of the dystopian waste land of capitalism which is unfolding right before our eyes. In terms of spirituality, Sogyal Rinpoche is one of the many incarnations of what we can call an invisible power structure, one that is forcefully normalizing society and the individual without being known as the normalizing power it effectively is. Or in plain words: The “meditation” people like Sogyal Rinpoche are teaching is used only to get exploited, stressed out and depressed people ready for another work day.

Sogyal Rinpoche is the author of a famous book, The Tibetan Book of Living and Dying. This book is influencing the picture of contemporary Buddhism to a large extent. A lot has already been said about this book (cf. for example Donald Lopez’ Prisoners of Shangri-La, p. 78-80). Here, it should suffice to relate a few facts to the people publishing and reading Adbusters about this “Rinpoche” – the latter, by the way, being a Tibetan honorific title that in no way can be claimed by this man. The man should be called simply Sogyal from Lakhar.

Sogyal from Lakhar is the typical Tibetan teller of fairy tales who paints a rosy picture of the oh so holy Tibetan Buddhism. He is good friend of another well-known famous story teller of the Shangri-La myth: Robert Thurman. Both are backed up by the one man nobody should dare say a bad word about, the Dalai Lama – of course. What story do these people propagate?

The myth of the holy land and perennial philosophy

In the first pages of his book, Sogyal from Lakhar paints the well-known rosy picture of his native land Tibet. It is a child’s dream, a fairy tail (remember Tolkine’s Shire?). Everything is good, and every other monk is enlightened. Europe is the opposite. Soygal’s vision of Europe is about a land in which only zombies live. It’s the typical black and white picture esoteric Buddhism paints: the good Shangri-La and the bad West that is devoid of any spiritual life. And our problem, of course, is that we think too much. At no point does Sogyal from Lakhar go beyond this simplistic and infantile picture.

If we turn the page of Adbusters on which the ignorant anti-intellectual and, in fact, kind of racist sermon by the holy Sogyal is printed, we see what there was in Europe when he came there. We see a big picture of a laughing and cheerful Michel Foucault.

I think nothing could illustrate better the mistaken view of Adbusters on Sogyal from Lakhar then putting these two people in such close context.

The black and white picture of Europe vs. Shangri-La Sogyal uses is nothing but a selling scoop to make big money with a commodity x-buddhists dream about so urgently: Enlightenment. In the case of Soygal, this commodity is called Rigpa. Clever as he is – he comes from a very rich Tibetan family of merchants – he founded an enterprise called Rigpa. There you can buy every other hour of hogwash he presents when, for example, his so called Holiness, the unsurpassable Dalai Lama, comes to preach in a sold out stadium. An hour of verbiage you get for $30. Cheap, isn’t it?

By the way. It should be mentioned that the book wasn’t written at all by our clever friend from Lakhar. At least we should be very skeptical about the authorship. It is doubtable that our rigpa merchant really read all those famous names he cites: Montaigne, Blake, Rilke, Henry Ford, Voltaire, Origen, Shelly, Mozart, Balzac, Einstein, Rumi, Wordsworth etc. (cf. Lopez, p. 79). It is much more plausible that his two ghost writers looked up citations from these Westerners to support the claim that what comes from Tibet is, of course, some kind of universal human knowledge about all and everything that everybody knew in the good old times, things the Buddha knew, and which was lost in the bad bad West when it began to think a bit beyond God the Almighty. The two men who most probably wrote the book are well-known for their fantasy literature books and rosy esoteric pseudo-lore: Andrew Harvey and Patrick Gaffney.

What we are speaking here about – this is a point Adbusters must think about – is “perennial philosophy.” Ask Žižek about it. He is mentioned below the photo of Foucault. Sogyal is selling a universal remedy to people we call x-buddhists because they believe in such a universal – and, let’s not forget, who pay for it too. But the universal truth of Buddhism, the Dharma doesn’t exist. Nevertheless, it is the perfect product: It is Putting Nothing in Boxes and selling it. That is what capitalism is all about. Selling nothing for a lot of money. And Sogyal is just doing this.

It is weird that a magazine  setting out to do something against the frantic devastation of our world by capitalism is mentioning such a person. Obviously there is a misconception what this guy is about. Adbusters must educate itself about x-buddhism and its propagators of intentional dementia. Sogyal from Lakhar, Robert Thurman and the Dalai Lama are the main protagonists here. But other people should be scrutinized too. The critique presented at this website about the so called Secular Buddhism by Stephen Batchelor will help. Or see Thích Nhất Hạnh walking mindfully in circles, contemplating how to save the world while it goes to hell. Interrogate all those Buddhist geeks out there: Noah Levine, Brad Warner, Ted Meissner, Vincent Horn, or any other x-buddhist putting up shop in the mindful business. Apart from general remarks about how bad it really is they will have no clue about the situation our world is in and how we got there.

Self control and the ethnographic gaze

From these people we never will learn how society functions and how the structures come to life that govern it. Foucault is a good starter, but forget x-buddhism. In fact, in what Gilles Deleuze called Society of Control, in following Foucault’s historical analysis, we find the subject that internalized control. Control that was executed in the 18th and 19th century by a discipline that had to be learned and fulfilled, is now self control. Meditation is part of this self control. Every little rule how to live today we follow voluntarily. Nobody has to tell us any more what to do. We do it in a seemingly spontaneous way. It seems natural to us. It seems natural to us, for example, to begin to meditate, that is, to look inside for the ultimate remedy. Meditation is the one big hype. Jon Kabat-Zinn makes big money with his MBSR. Just relax, and everything will be ok again. Who told us this? Who told us to look inside for a solution? Yes, Sogyal from Lakhar and the Dalai Lama tell us, and it seems so obvious, so natural, to find peace within, the shelter, ultimate  refuge. But who tells us that this is true? Where can this truth from within come from?

If we want insight into the functioning of our world we have to turn to people like the thinkers mentioned in the opening citation of the text by Hamid Dabashi. That text immediately follows the picture section in the beginning the current issue of Adbusters. But Dabashi rightly asks if also these European thinkers have the “ethnographic gaze.” He mentions, too, many thinkers from all over the world whom we should consider as comrades in thinking new thought. That’s good. Very good. But skip the x-buddhists. They sell their perennial philosophy without knowing that they themselves are deeply infected with the “ethnographic gaze.” Turn to Donald Lopez’s book to get a picture of how, in fact, Tibetan Buddhism, and indeed all Western Buddhism, is the dream the West has about Buddhism – a hallucination to ward of the off the reality of the waste land that is our lives.

There is a direct and unmitigated structural link between an imperial frame of reference, and the presumed universality of a thinker thinking in the bosoms of that empire.

That’s from p. 17 of the text that directly follows the Sogyal from Lakhar citation. x-buddhism as represented by a “thinker” like Sogyal from Lakhar is exactly this imperial thinking. Jacques Derrida, featured prominently on p. 17, told us that there is no original. Imperial x-buddhist thinking will always tell us that there is, in fact, one. All x-buddhists mentioned so far believe, in one way or another, in this original: the Buddha. People like Derrida are light years from this childish dream… although, and that’s where Hamid Dabashi is right, there is residual eurocentrism in Derrida. But that is no excuse to go back to something like x-buddhism.

There is a meme used sometimes by Adbusters: Spiritual Insurrection. What kind of spirituality are we talking about here? Certainly not about the imperial x-buddhist thought of enlightenment that we can buy at Sogyal from Lakhar’s rigpa shop. What we can say for sure is that the-Buddha-will-save-us-all-thought will not do.

We have to get a clear picture of how spirituality today is a feature, a component of capitalism, one that functions as a tranquilizer instead of as a wake up-call.

We have to ask what spiritual traditions can legitimately offer – whether we can, for instance, get beyond our inherited “ethnographic gaze.” If at all they have to offer something…

But of course, we have to realize somehow the “ethnographic gaze”? How do we do this?

Can we think out of the box at all? That is a question asked by Foucault. Is there an outside from which to intervene? That is a very spiritual question? What if not?

What can we really do in this situation? That is a truly spiritual question in the sense that it is asking for something really new. Something our spirit will generate without us knowing it yet.