Immanent Critique for the People!

Several readers have contacted me about more hands-on exercises like Tom Pepper’s post “Reality and Retreat.” That post challenged us to do a kind of anthropological study of an online Shambhala retreat.

Maybe some of you will be interested in engaging the intelligence-enhancing practice of immanent critique. It’s fun, and edifying, too!

Recall what art historian Lydia Goehr taught us a while back:

To [Theodor] Adorno critique is not the promise of happiness, nor the promise of freedom. It is always immanent critique, the turning of thought back upon itself… This is the way that some of the so-called “social truth content” comes out of critique: It exposes the authority that concepts have over us. My suggestion is that one way to think about critique is in terms of looking for ways in our thinking to break the authority our thinking has over us. In that sense, there is nowhere to go outside of our own capacity to think.

This practice isn’t content with a slick dismantling of its object. I think that most readers of this blog will agree that, in the case of x-buddhist materials, that’s as easy as it is endless. The more difficult, and more satisfying, practice is entering the object as it presents itself, and looking at it on its own terms. For example, when our material proclaims “Our mission is pretty simple: we exist to enable humans to feel good,” we do not doubt it. Rather, we set to work exploring just how it validates its very own premise.

Doing so, we often begin to notice contradictions, aporia, and a rich assortment of other confusions and obscurations at work. That’s when the fun begins! Since we wholeheartedly desire “to enable humans to feel good” no less than the teacher or community that we are critiquing, we begin to note if, when, and in what manner things start to go awry. It is not, or at least not initially, a question of right and wrong that interests the critic, but rather that of production. So, in our example, we start to wonder who exactly this “human” is, and what exactly “to feel good” is made to entail. In other words, what is the ideal creation of the material? In this manner, we can get at the “social truth content” that the material itself is often blissfully unaware.

I suggest that we take as an example the MNDFL Meditation website. That’s where that mission statement that I quoted as an example is from. I suggest this site because it strikes me as an excellent example of a quintessentially early-twenty-first-century American phenomenon: Neoliberal Buddhism. To my mind, MNDFL represents the completion of a process that lies at the very heart of the nineteenth-century Western Buddhist project; namely, the seamless grafting of depotentialized social-revolutionary concepts (disenchantment, nihility, vanishing, non-self, etc.) onto the indefatigable capitalist desiring machine. As you will quickly see, we could thus call MNDFL “Boutique Buddhism,” precisely the form of presentation which we would expect of a heavily capitalist-inflected Buddhism.

How might you begin to “read” the site? I suggest applying basic categories to it, and observe how each of them is in play. For example, peruse the teacher page and start with the raw matter of the human body. Beyond even basic categories like gender, race, and ethnicity, what kind of bodies (face, weight, skin, teeth, etc.) are the order of the day at MNDFL? Are there exceptions? Do these apparent exceptions appear begrudged or awkward? Are they celebrated? Hidden or minimized? What do you make of these bodies? What do they tell us about the “social truth content” of the site? Try applying any of these categories as well.

Discourse. Which of those Lacanian discourses is being utilized: master, hysteric, university, or analyst?

Ideology. How does the site support the reproduction of our current social relations? Or does it rather present beliefs and practices that counter the status quo?

Subjectivity. What sort of person, acting in what sorts of ways in the real world, is presented? What might a one-word summary of this subject be?

Desire for what is being aroused? Or put another way, what is being promised such that a $115 MNDFL SE MOONSTONE MALA or a $200 cushion (sold out) appear reasonable acquisitions? 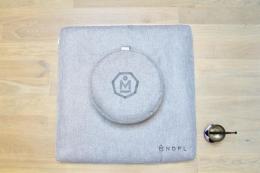 Hyperreality. Is there some idea of a “real” that is more real than our shared reality?

The Big Other. What sort of references are being made to potentially accessed meaning and power?

And don’t forget to consider imaginary plenitude or the curative fantasy!